BMP180 compatible S/6.00
Back to products
Next product

With the new Arduino M0 board, the more creative individual will have the potential to create one’s most imaginative and new ideas for IoT devices, wearable technologies, high tech automation, wild robotics and other not yet thinkable adventures in the world of makers. The Arduino M0 represents a simple, yet powerful, 32-bit extension of the Arduino UNO platform. The board is powered by Atmel’s SAMD21 MCU, featuring a 32-bit ARM Cortex® M0 core. With the addition of the M0 board, the Arduino family becomes larger with a new member providing increased performance.

The power of its Atmel’s core gives this board an upgraded flexibility and boosts the scope of projects one can think of and make; moreover, it makes the M0 the ideal educational tool for learning about 32-bit application development.

The Arduino M0 is open-source hardware! You can build your own board using the following files:

EAGLE FILES IN .ZIPSCHEMATICS IN .PDF

The Arduino M0 can be powered via the micro USB connection or with an external power supply. The power source is selected automatically. External (non-USB) power can come either from an AC-to-DC adapter (wall-wart) or battery. The adapter can be connected to the board by plugging a 2.1mm center-positive plug into the board’s power jack. Leads from a battery can be inserted in the Gnd and Vin pin headers of the POWER connector. The board will automatically detect which power sources are available and choose which one to use according to the following priority:

External power is required when the 500mA through the USB connector is not enough to power a connected USB device in a USB host application. The power pins are as follows:

Each of the 14 digital i/o pins on the M0 can be used as an input or output, using pinMode(), digitalWrite(), and digitalRead() functions. They operate at 3.3 volts. 7mA as maximum DC current for I/O pins and an internal pull-up resistor (disconnected by default) of 20-60 kOhms. In addition, some pins have specialized functions:

The Arduino M0 has a number of facilities for communicating with a computer, with another Arduino or other microcontrollers, and with different devices like phones, tablets, cameras and so on. The SAMD21 provides one hardware UART and three hardware USARTs for 3.3V serial communication. The Arduino software includes a serial monitor allowing simple textual data to be sent to and from the board. The RX and TX LEDs on the board will flash when data is being transmitted via the ATSAMD21G18chip and USB connection to the computer (but not for serial communication on pins 0 and 1). The Native USB port is connected to the SAMD21. It allows for serial (CDC) communication over USB. This provides a serial connection to the Serial Monitor or other applications on your computer. The SAMD21 also supports TWI and SPI communication. The Arduino software includes a Wire library to simplify use of the TWI bus. For SPI communication, you can use the SPI library.

The Arduino M0 can be programmed with the Arduino software (download). If you use Linux-based OS follow the guide Arduino IDE on Linux-based OS. Uploading sketches to the SAMD21 is different from how it works with the AVR microcontrollers found in other Arduino boards: the flash memory needs to be erased before being re-programmed. Upload operation is managed by a dedicated ROM area on the SAMD21. USB port: To use this port, select “Arduino M0 (Native USB Port)” as your board in the Arduino IDE. The Native USB port is connected directly to the SAMD21. Connect the M0 Native USB port (the one closest to the reset button) to your computer. Opening and closing the Native port at 1200bps triggers a ‘soft erase’ procedure: the flash memory is erased and the board is restarted with the boot loader. Opening and closing the native port at a different baudrate will not reset the SAMD21.

The M0 has a resettable polyfuse that protects your computer’s USB ports from shorts and overcurrent. Although most computers provide their own internal protection, the fuse provides an extra layer of protection. If more than 500 mA flows through to the USB port, the fuse will automatically break the connection until the short or overload is removed.

The maximum length and width of the M0 PCB are 2.7 and 2.1 inches respectively, with the USB connector and power jack extending beyond the former dimension. Four screw holes allow the board to be attached to a surface or case. Note that the distance between digital pins 7 and 8 is 160 mil (0.16″), not an even multiple of the 100 mil spacing of the other pins.

S/159.00
The Arduino MKR WiFi 1010 is the easiest point of entry to basic IoT and pico-network application design. Whether you
Añadir al carrito
Quick View 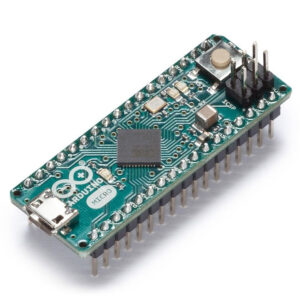